“Winning is not everything, but participation and the will to win is everything” with such a motto, the fervent athletes of AVM plunged into the overflowing enjoyment of day-1 of the Annual Athletic Meet 2014-15. The ground vibrated with feverish enthusiasm as the tempo set in with announcement of different track and field events. The best part of the show was the participation of each and every student from classes I to XI. It was held in age-wise categories to make all the events fairer and more enjoyable and to bring out the true sportsman spirit in each athlete.

The events of the day were Ball Throw, Shot Put, Discus Throw, Triple Jump and 50 m and 100 m dash hits for various groups. These events evoked a lot of passion and zeal among the Atmiyans, with each contestant trying to outdo the other and secure the most priced medal.

There was a spectacular view of the venue - different sections of the huge ground were decked with hues of vivacity and verve - factually the different fabrics and art-material of all four house colours. All the students along with their teachers, didis and sports teachers grouped near the arena of their respective choice of events. The teachers and the students were excitedly cheering their respective house participants, voicing the spirit of oneness among all.

The ground reverberated with blend of different uproars of cheers made by the gleeful students, the nerve-catching sound-tracks played on the speaker system by Hirenbhai was adding to the excitement. Last but not the least was the air-borne voice of Mukesh sir who was moving around with his running commentary and updating all with the latest happening across the ground. Thus the day ended with an ardent desire and unabated waiting for the second day of this Athletic Fiesta.
Posted by Seema Joshi at Saturday, January 31, 2015 0 comments

The Grand Opening of the Atmiya Annual Athletic Meet 2015

After the Uttarayan Break, students could hardly wear off the joy and vivacity of such a long vacation when AVM family geared up for the much awaited and one of its own kind - the Annual Athletic Meet! However, the athletic fever began to pervade the campus well before the actual day with athletes practicing hard under the guidance of their sport teachers, regularly since the day school reopened.

The whole school decamped to the huge cricket ground, in front of the school’s ‘Charanraj’ building which looked no less than the hosting place for the Olympic Games. The opening ceremony of this three-day Athletic Fiesta was held on 29th January 2015. The school ground was decked in the house colours of purple, blue, green and orange. The eye-catching decoration at the different field arena and the track boundary was much appreciable.

The esteemed personalities from the YDS fraternity and notably the senior members of AVM and trustees, saints from Haridham and the school Principal graced the occasion with their benevolent presence. The chief guest of this opening ceremony was Mr Mukund Bhandari, Principal of the J.B. Diamonds & KARP Impex Vidya Sankul.

As all AVM family members gathered for this occasion, the programme started with the arrival of the guests. General salute was offered to the guests and they were led to the stage by the escorting team. As per the tradition of the school, the guests were invited to perform poojan of Thakorji to invoke God’s presence and blessings for the event after which everybody’s eyes were fixed on the ground where students were overjoyed and much excited for such a mega-event. First of all, teams of all four houses participated in a walk-past. Thereafter, a scintillating dance on the song ‘Ab teri bari hai’ was performed by students of Std 6-7. It was followed by an amazingly powerful presentation of the yogic ‘Surya Namaskar’ by the younger students.

The spectators were spellbound to see the next performance, which was ‘Bamboo Drill’ by the students of all four houses. The flying camera was hovering all around to capture the memorable glimpses of this grand occasion. Then the attention was shifted to the stage as the hosts of the programme invited Pujya Suhrad Swamiji to bless the students and teachers with his words of wisdom. After the inspiring and invaluable speech, the melodious voice of Shreemadbhai impressed everybody when he and his group sang a beautiful song.

Now it was the time for flag hoisting; the school principal Dr. Vijay Patel and the respective house conveners were invited to hoist the school and the house flags. It was a scene worth watching on the ground, when the Athletic Meet formally started with the torch relay by the school’s sports achievers who have taken our school to new heights in different sports. They carried the flame around the track and handed it over to the school principal to light the cauldron of the Athletic Meet and thereby started a new journey towards newer and greater heights. After that, the school’s sports captain Rahulbhai was invited for the oath taking ceremony.

With such gallant commitment of honesty and sportsmanship, with such a spectacular view of hundreds of colourful balloons flying, and with such an overpowering upsurge of excitement the 11th Annual Athletic Meet at Atmiya Vidya Mandir was declared OPEN!!!
Posted by Seema Joshi at Friday, January 30, 2015 0 comments

AVM students are being provided platforms to flourish with their inherent talent through different academic activities as well .In order to unleash their creativity and literary talent. Class IX students were inspired by their English teachers to compose poems following up their class-room learning of Kahlil Gibran's famous poem 'Song of the Rain’. Students were guided in their English class to compose their own poems by using literary devices like simile, metaphor, personification, alliteration and rhyming scheme. 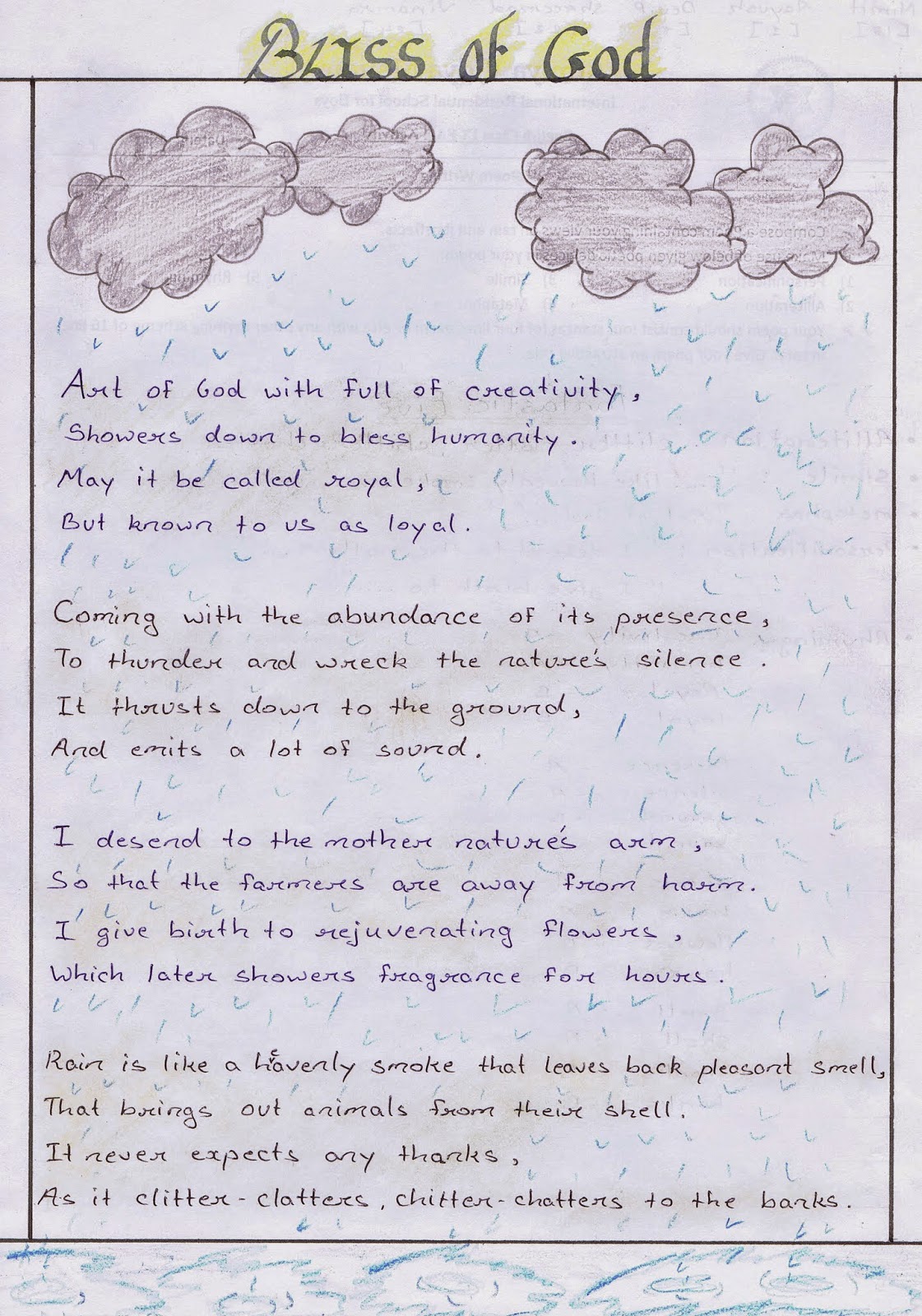 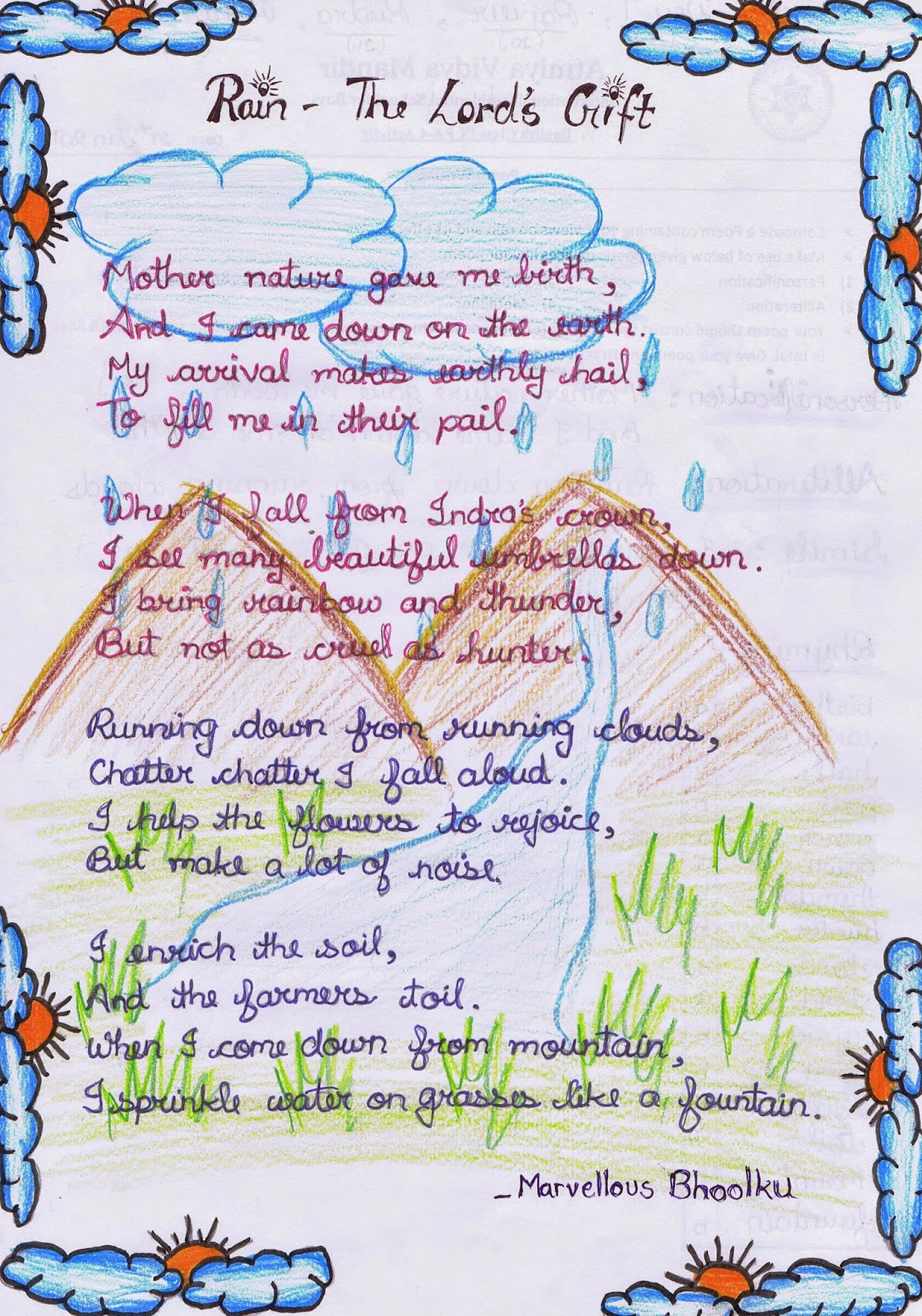 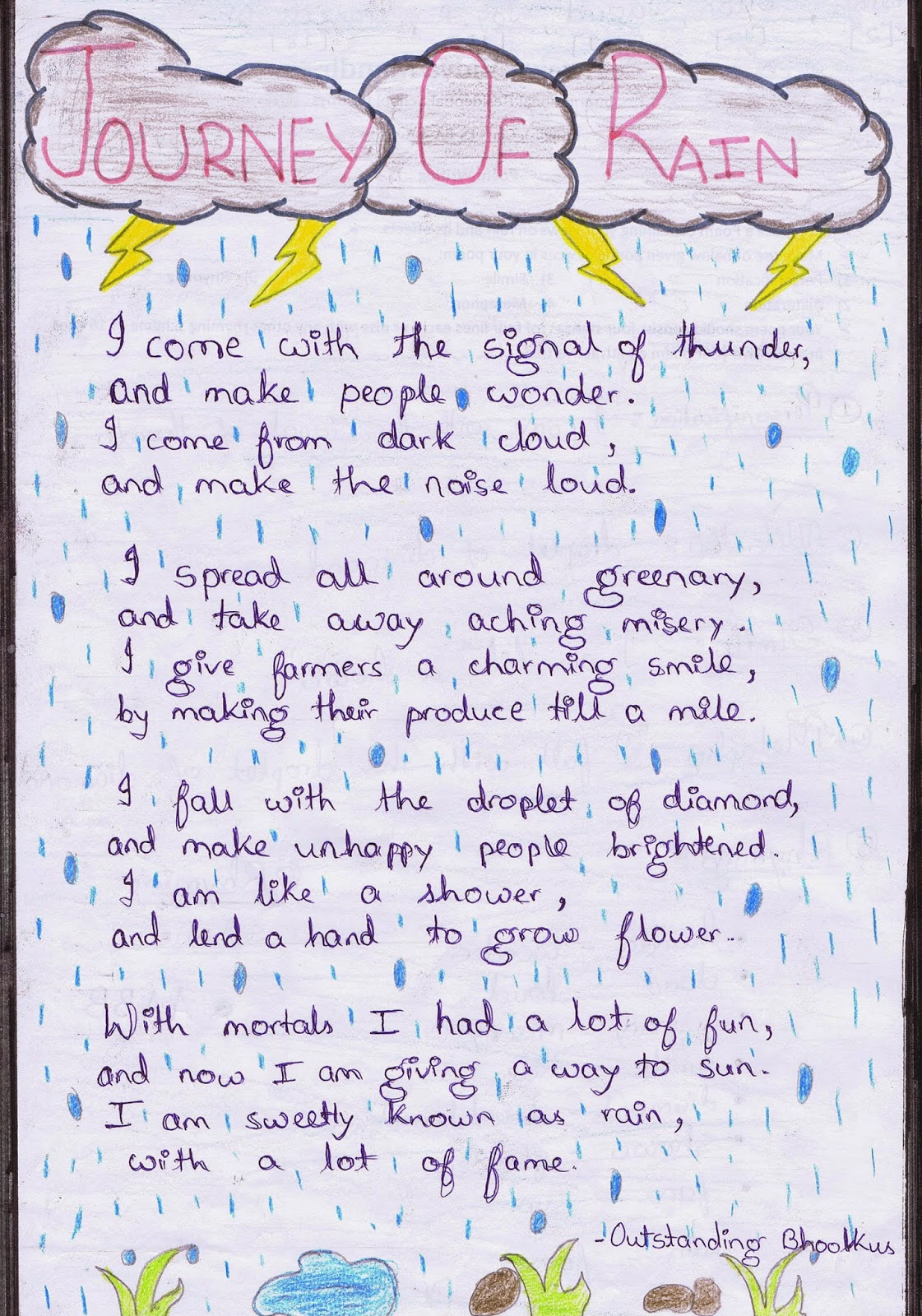 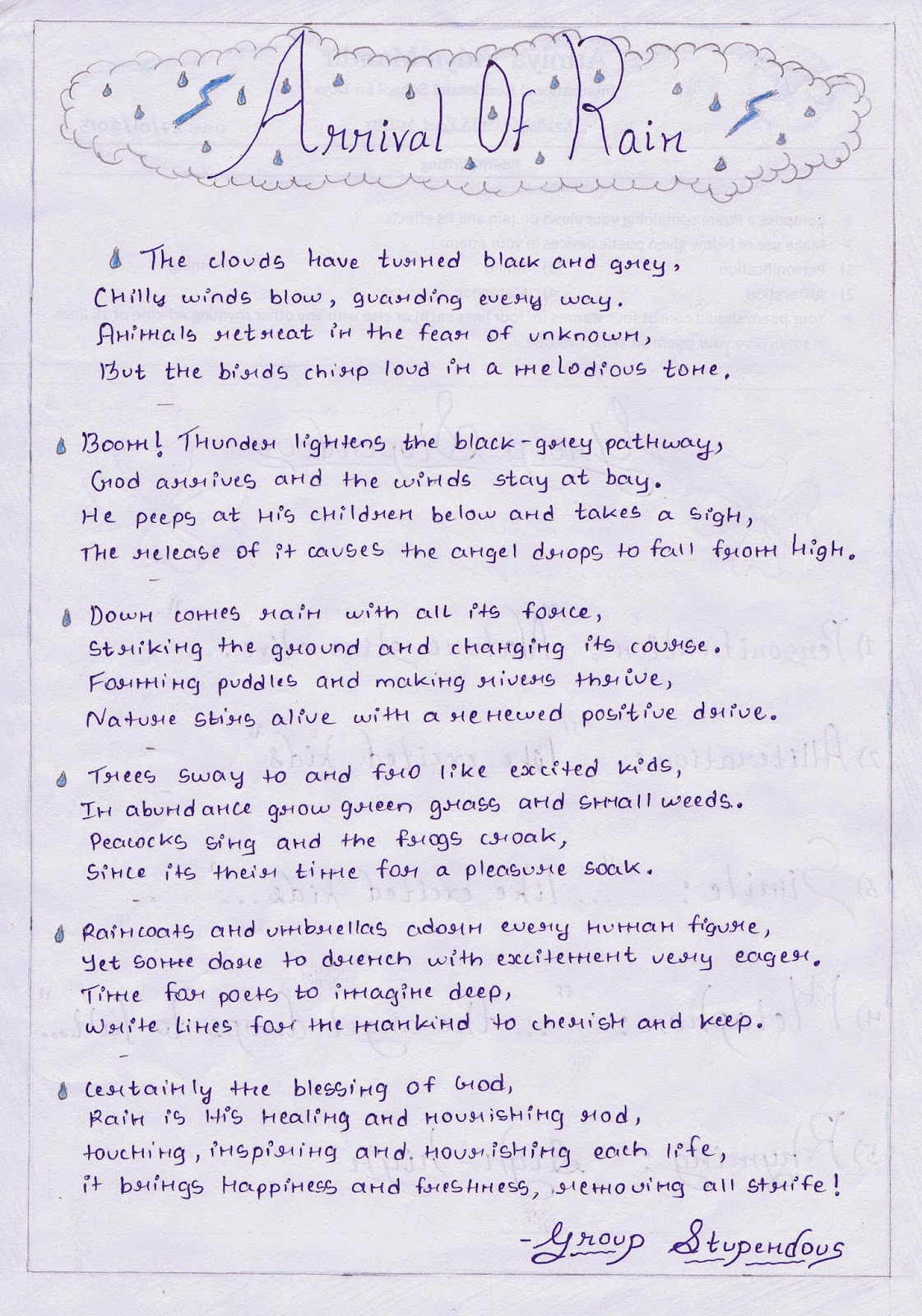 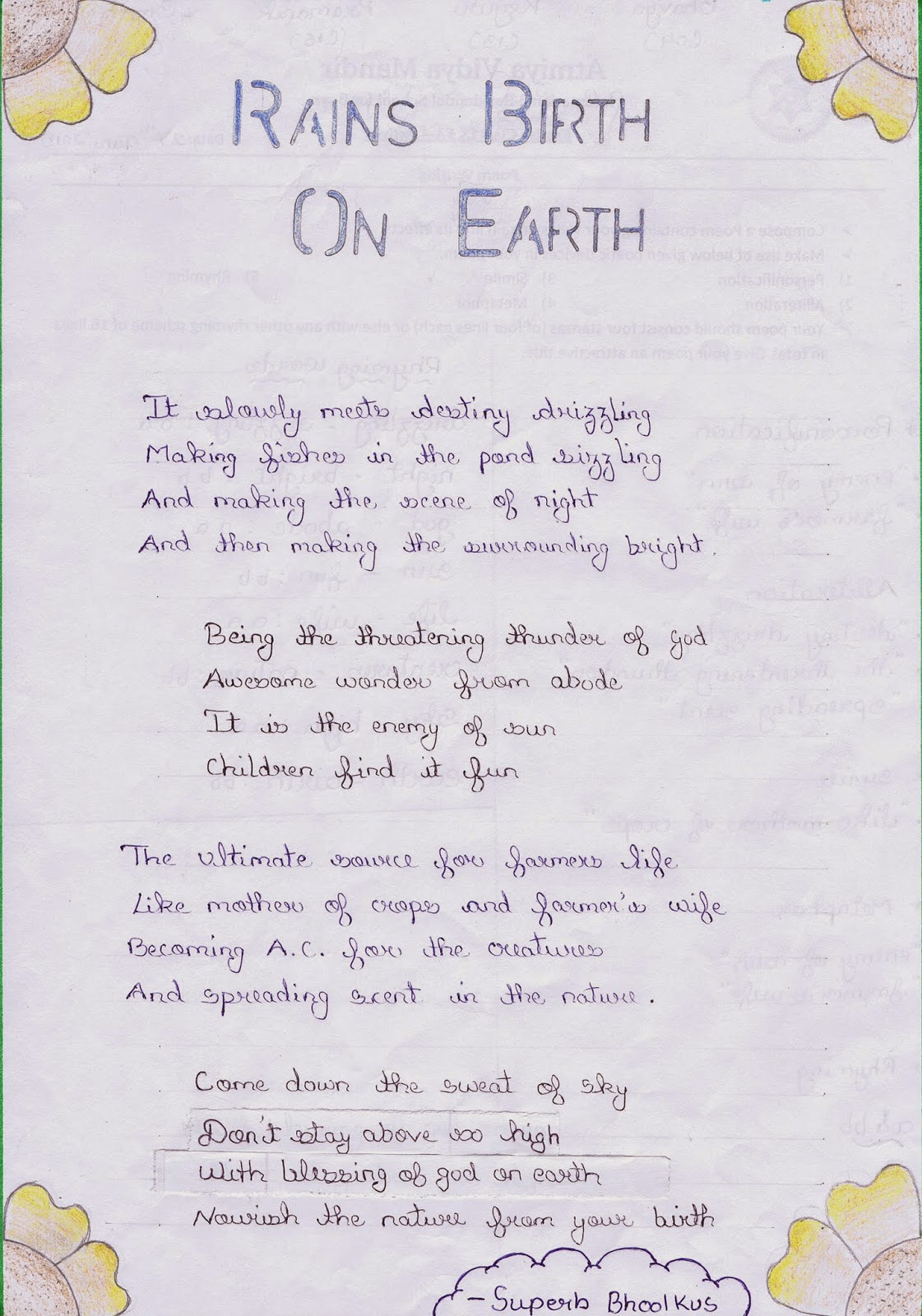 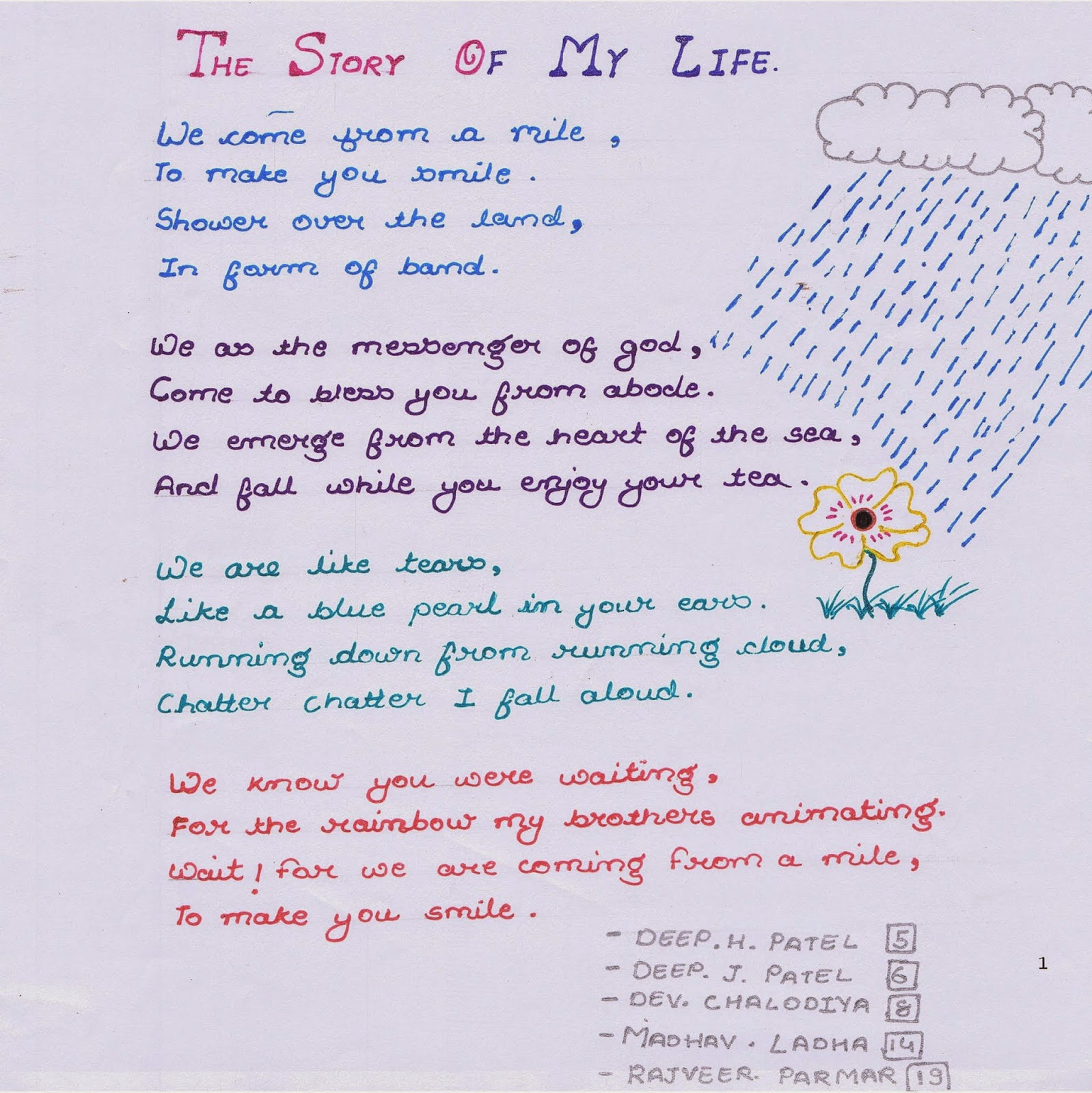 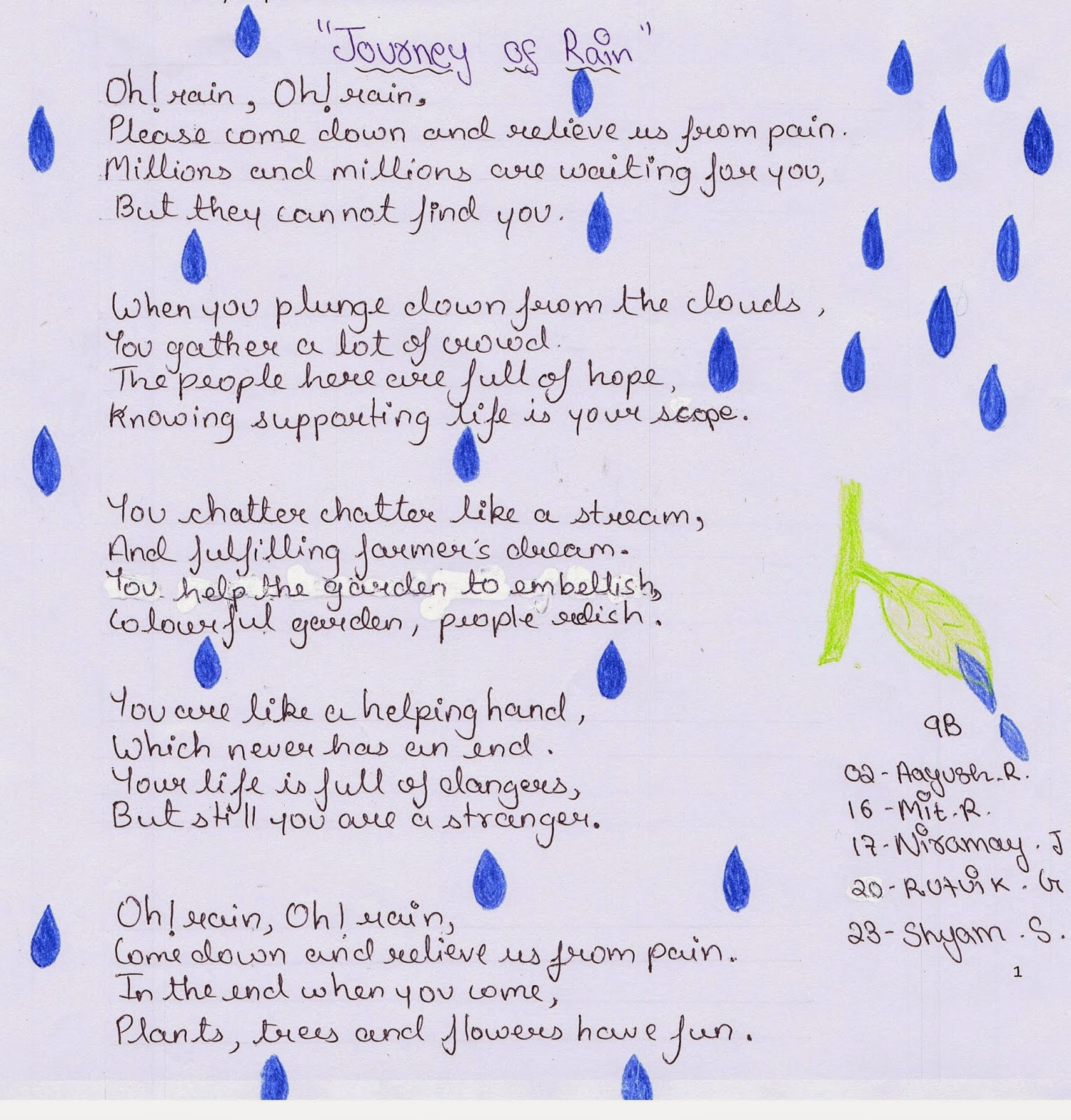 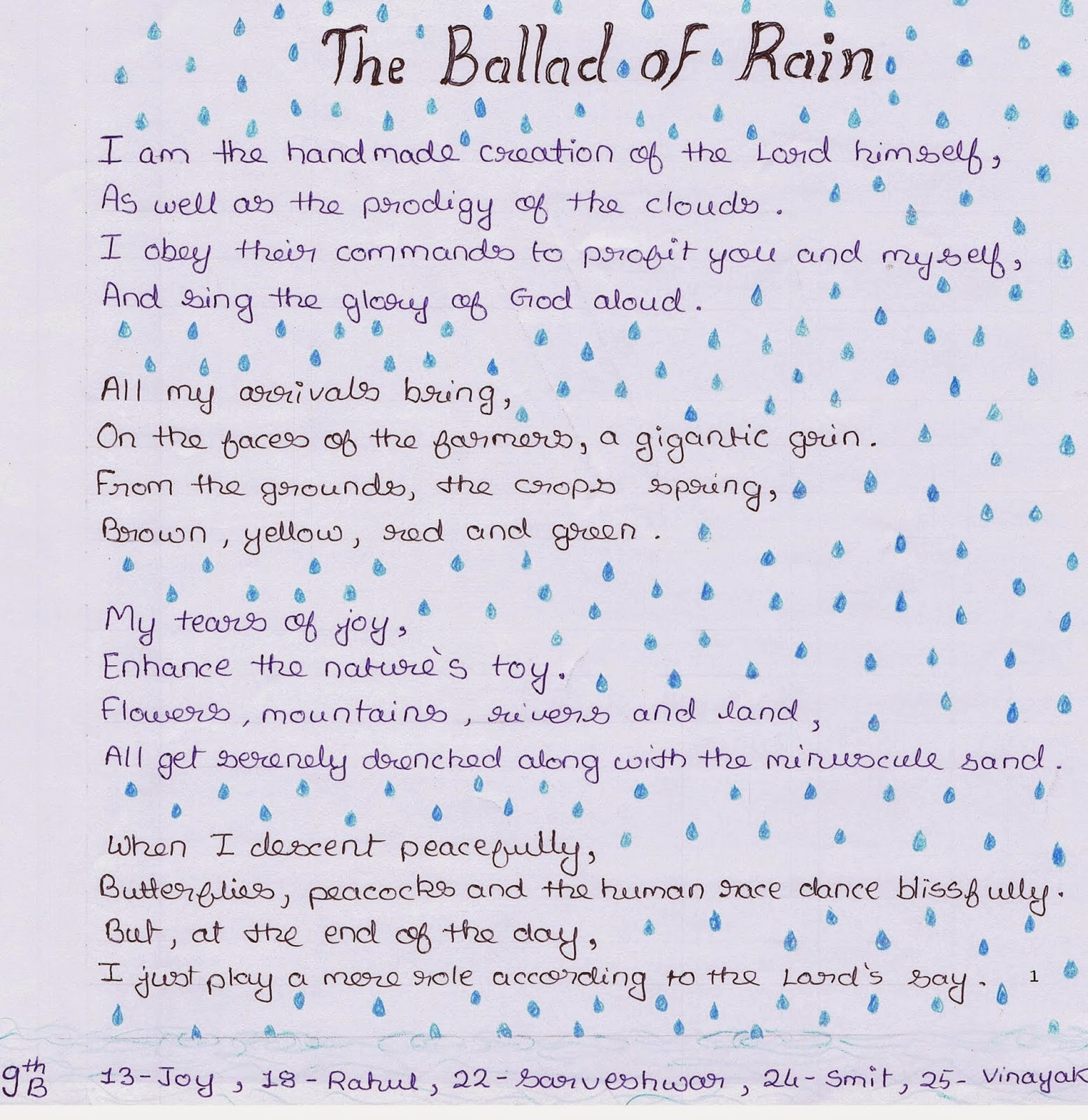 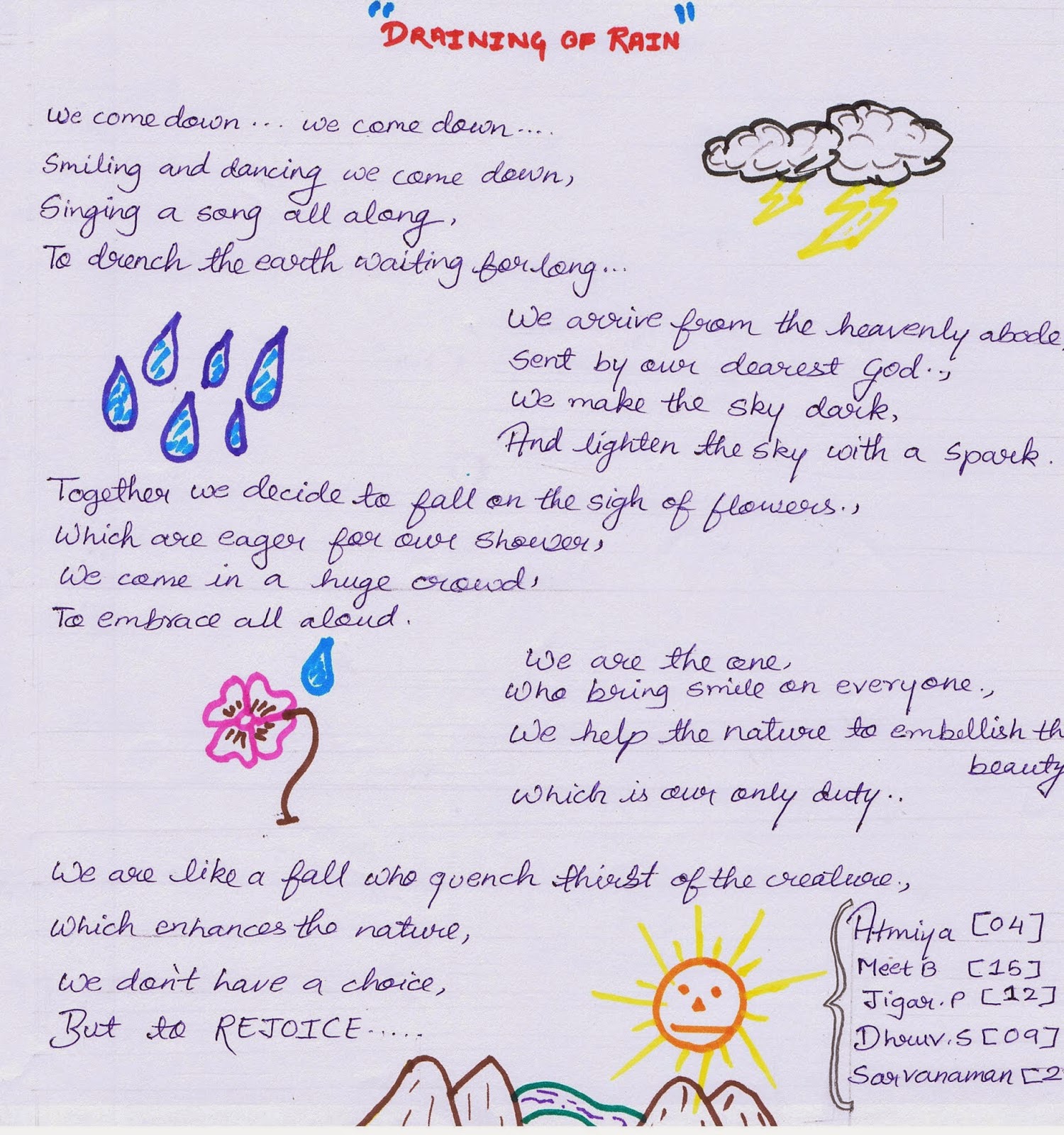 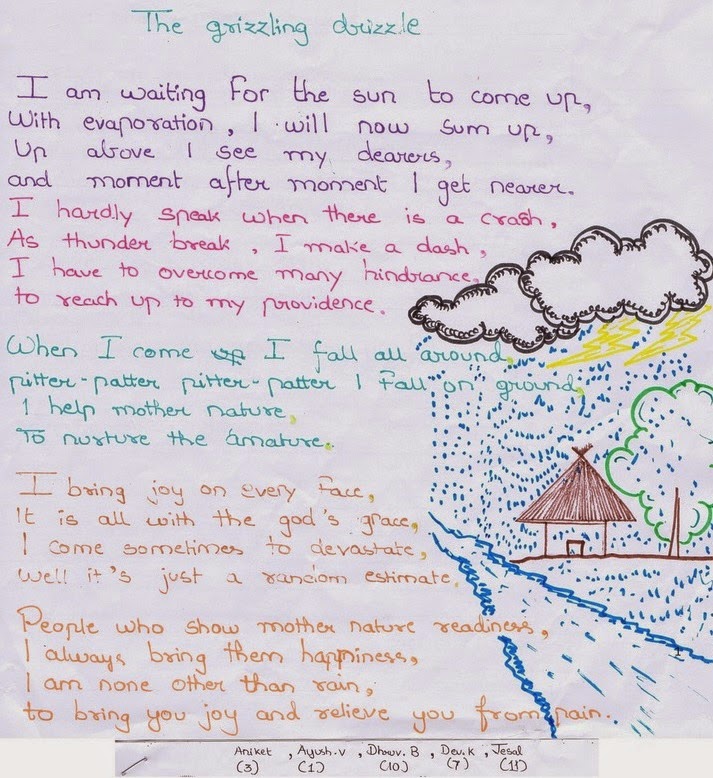 The 66th Republic Day of India was celebrated with grandeur at Atmiya Vidya Mandir. The occasion begun, welcoming the Principal and other distinguished guests by the school’s student council.

The honourable School Principal, Dr. Vijay Patel performed Thakorji's poojan and then unfurled the National Flag which was followed by the National Anthem. Students in their respective house groups, marched boldly to pay respect to the National Flag with a great deal of patriotic zeal and passion. The choir group presented the National Song "Vande Mataram". The whole school joined the choir and the song echoed in the surroundings.

Moving further with the event, students brought the stage alive with their patriotic spirit via a specially choreographed dance "Salaam India" for the occasion. The unbeatable music and graceful movements of the dancers were mesmerizing. The entire school courtyard reverberated with the rhythmic beats of the song “Salaam India".

Later on, our respected Principal Dr. Vijay Patel addressed the students on this remarkable day which is celebrated every year on the 26th of January to commemorate the date and moment when the Constitution of India came into effect. The students were also reminded that how little tasks needed to be done and how the students of today hold the future of their country in their hands.

On this special day, students who showed their outstanding performances in the fields of sports were awarded the certificates by the distinguished guests.

The students dispersed after sweets with the delightful and inspiring image of the waving tri-colour in their hearts.
Written by: Rashmi Ma'am
Posted by AVM Teachers at Tuesday, January 27, 2015 0 comments

Who is the Judge?
God.
Why is He God?
Because He decides who wins or loses not my opponent.
Who is your opponent?
He does not exist.
Why does he not exist?
Because he is merely a dissenting voice of the truth I speak.
So speak the truth.
~ from the movie: The Great Debaters

The above dialogue from the movie, The Great Debaters is the underlying principle on which, the AVM Debating Club functions. Though the students of the club engage in fierce verbal battles, they understand that they are just trying to find the truth. The purpose of the club is to improve the logical reasoning, analytical thinking and persuasive communication skills of the students. Under the guidance of teachers, all the debaters get an opportunity to work in a team, representing their respective houses.

The yearlong club activity commences with new registrations from class 6, at the beginning of each new academic year. Immediately after the registration, students become a part of the club and initiate their training as a debater. After the training, they participate in practice debates. In these debates they are observed by their teachers and receive constructive feedback to improve their skills. Once registered, the students remain an active member of the club till they graduate from the school. Currently, the AVM Debating Club serves 94 students from classes 6 to 10.

The teachers of the English department of the school have prepared nine graded modules. Each newly registered student of the club goes through a nine-week course, learning the basic skills of the art of debating. The details of the training sessions held during the year are as follows:

Simultaneously, when the new debaters are learning the art, the previously registered members participate in practice debates throughout the year. This year fourteen practice debate sessions were organized, wherein, students got the opportunity to hone their skills, based on positive and constructive feedback from the teachers. The details of the practice sessions that were held during the year are as follows:

The activities of the year come to an end with the organization of a school-wide Inter House Debate Competition. This year’s competition brought out the best of the language skills of all the students. Participating students worked six to eight hours a week on their speeches. Teachers constantly helped them in revising and updating their drafts. This year’s competition was fierce and you could see the participants preparing and practising their speeches with great zeal.

Details of the Inter House Debate Competition for class 6: 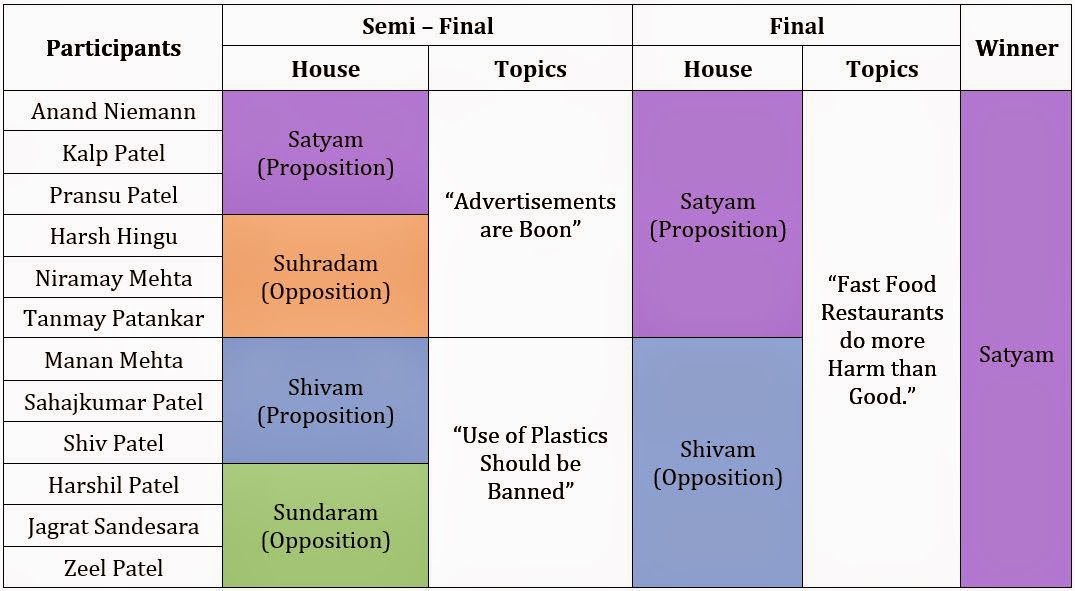 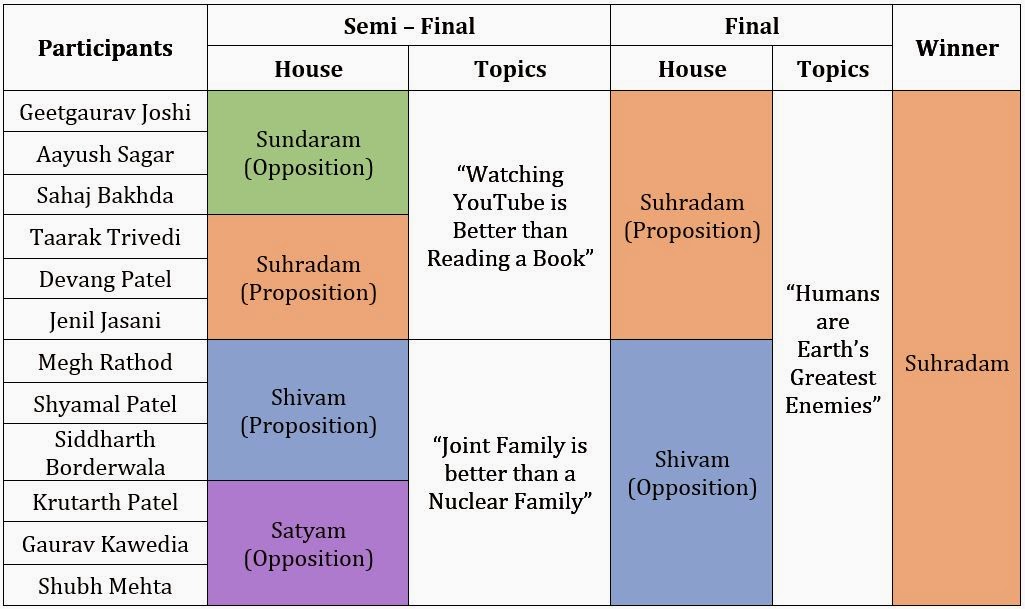 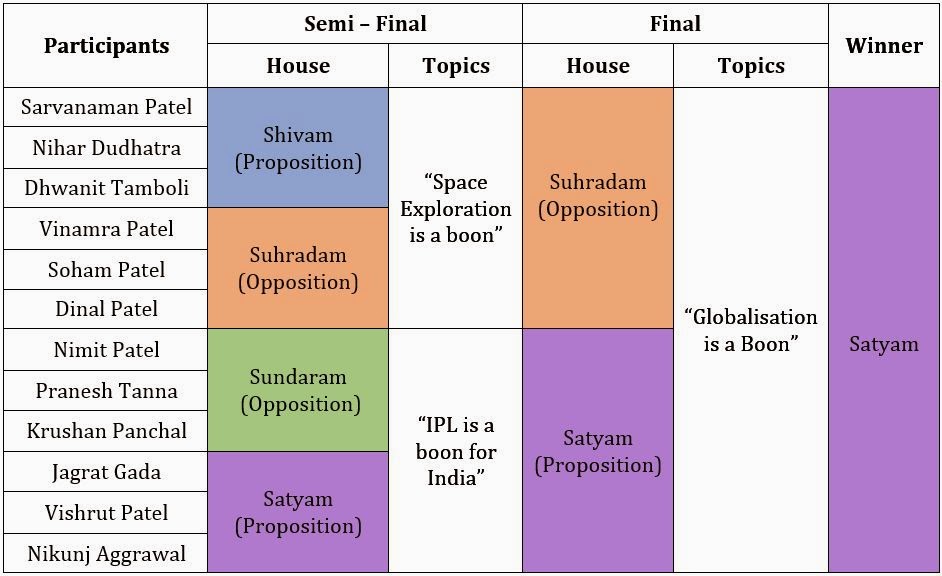 Details of the House Points for the Inter House Debate Competition:

In the end, it was the Satyam House team that became the debating club champion for the year 2014-15. The students of the house shall lift the trophy and the winners and runners-up team members shall be awarded certificates in the school closing ceremony on 14th of February.

Thus, an electrifying year came to an end with the students becoming better debaters than yesteryear.