The ongoing sports fiesta at Atmiya Vidya Mandir play ground reverberated with lots of booming, hooting and cheering as the students, teachers and hostel staff enjoyed the track and field events of the second day during 7th Annual Athletics Meet 2010.The lime light was, of course, the chief guest who was none other than Dhupli Sir, who was a part of the recently held Commonwealth Games and who has served in Atmiya Vidya Mandir for a few years now.


Attending a track and field meet was altogether a different experience, almost like watching a three-ring circus, with a variety of action happening at the same time.

Sports H.O.D Shekhar Sir along with Kalpesh sir and Ramakar Sir were walking across the ground to ensure smooth happening of all the events. Pranshu Savani and Yathansh Joshi enthralled the crowd with their commentary as they handled the mic very well. Niharika Mam and Manju Mam spiced up the fun and frolic with their witty remarks from the stage.

Team officials and teachers have been allocated their particular groups for the entire meet. Each group has different house members and students competing in each event. The aim of the challenge is to collect points for their respective house and gain School Sports glory.

A very impressive and a spectacular event was the different races. It was the turn of the vaulting group of boys composed of group A to group D respectively running for 50, 100, 200 and 400 mt. race. Runners stride around the track, sometimes sprinting, other times pacing themselves, re-living the excitement, anticipation and glory started with much zest and zeal.

Another outstanding act was the long-leap that was high jump where Akshay D. Patel and Vishlesh Gondaliya bagged First and Second position.

The student volunteers were ever active wearing orange and green T-shirts with all hues of gaiety and gusto to extend their helping hand in medical, refreshments or ferrying the things across the ground. Hats off to their humble efforts!!!!

Right over the other end of the ground was the temporary office where Rupashree Mam and Jignesh Sir were watching over the participants and students of different house and groups on disciplinary level. Vijay Bhai and Pankaj Bhai were right on their toes to offer any medical help.

In the midst of the ground, Pravartak Sir and Pujeet Bhai were moving their cameras all around to catch the ongoing fervor for digital memories. The camera captured every move that the participant made.

Nothing could fall beyond the purview of the ever alert powerful watch of Bharat Sir, Anand Sir, Prerak Sir, Rashmi Mam, Ritesh Sir and Pradeep Sir who were at the starting and finishing lines of the racing track designated as Technical Expert, Umpire, Referee and Timekeepers.

The pulsating- jazzy music was well blend to the booming and shrieking of the students and teachers cheering the participants. Amazing tunes were played by Hiren Bhai and his group.

The principal Swayam Madam was spotted being one with the junior group of I and II std students. The house conveners of Satyam, Shivam, Sundaram and Suhradam houses were much more excited adding much to the excitement among the onlookers.

Combining seven different track and field events the participants, in quick succession, commenced their headlong assault over various track and field events which tests the endurance, strength and all-round ability of the athlete, awarding contestants points in each event for their best performance.
The winners of the second day events are as follows: 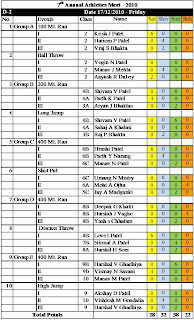