The Government of India, through the Ministry of Human Resource Development (MHRD), has established five Indian Institutes of Science Education and Research (IISER).These institutes are located in Bhopal, Mohali, Pune, Kolkata and Thiruvanantapuram.

The IISERs represent a unique initiative in India where teaching and education are totally integrated with state-of-the-art research nurturing both curiosity and creativity in an intellectually vibrant atmosphere of research.
Each IISER is an autonomous institution awarding its own Masters and Doctoral degrees. Please see below for their individual websites:
The advert below gives a summary of the courses offered and the admission procedure: 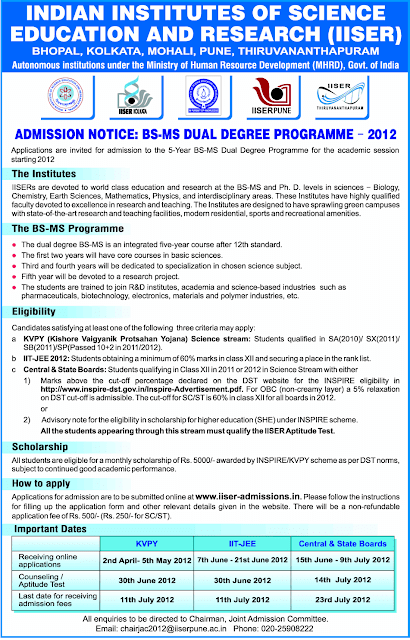 Manipal University has transformed itself into a knowledge powerhouse over the past few decades. It offers a highly diverse range of courses.

One of them is in the field of Hotel Administration. Please refer to the advert below for some information about the same. 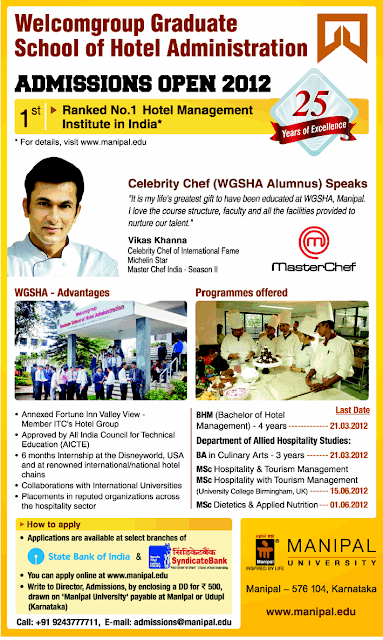 Arise, Awake and Stop not till the goal is reached!

Recently, Shivam House celebrated its last house week with a great intensity and enthusiasm. The value for the week was “The Life and Message of SWAMI VIVEKANANDA”. It was a great privilege and honour and at the same time very exciting to celebrate the 150th birth anniversary of Swami Vivekananda. The whole celebration was divided into two parts.
1. Weekly assemblies
2. Creative assembly

The weekly assemblies were the meticulous work of our dedicated teachers and the efforts of dedicated student members. Everyday a quote from Swami Vivekananda’s life shared along with its meaning to the fellow friends present in the hall.


The Monday-morning blues inaugurated with different quotes from Swami Vivekananda’s life following was the news of the day along with a mind-blowing presentation from the young kids of class 8 on the early childhood of Swami Vivekananda as Narendranath Dutta. The most remarkable and exciting thing was the promos shown for the creative assembly created by Pujeetbhai.

The week was followed by speeches, videos, motivating sayings, etc by the committed members of the house.

Then the great day of the EPIC FINALE arrived. Everyone in the school along with the teachers were excited in the anticipation of a unique and path breaking performance. The participants of the show were on their heels to set off and put a benchmark in the history of AVM.

The creative assembly was a great show presented by the members of Shivam House in a form of documentary. The performance had two live and two pre-recorded incidents from Swami Vivekananda’s life.

The core message of this ‘burning mid-night oil’ effort was to please our Guru HDH Hariprasad Swami Maharaj and to become the instruments in spreading HIS message like Swami Vivekananda did for his guru Ramakrishna Paramhansa. By the end of the documentary, Swami Vivekananda’s message ‘Arise, Awake and stop not till the goal is reached’ was implanted into the minds of all the students present.

Everyone was very happy to see the life of a person who has taught Indians to keep their head held high wherever they are. Hail Swami Vivekananda! Hail Indians!

The Dr D Y Patil Vidyapeeth, Pune offers very good opportunities in the field of Biotechnology, Medicine and other such specialty areas.

For admission into their Bio-Technology/Bio-Informatics/MBBS courses, they require students to have studied Physics, Chemistry, Biology at the 10+2 level and appear for their All India Entrance Test. For more details, check out their website: www.dpu.edu.in 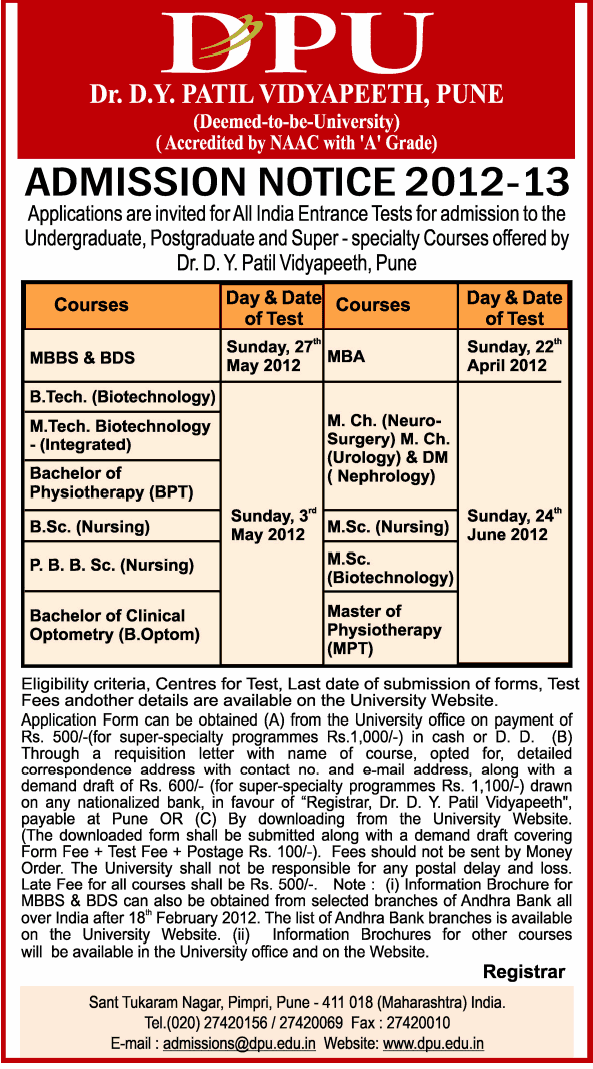 With annual commemorations of National festivals, students of Atmiya Vidya Mandir, by now, have very well understood that freedom comes with great responsibility. The Republic Day celebration is marked with integrating values of loyalty, commitment and nationalism to the students. On Independence Day, the past is recalled whereas, on Republic Day, the pledge is renewed. One such pledge for students of AVM is to be responsible citizen of united India where Wealth is outcome of work; pleasure is coupled with conscience, knowledge with character, commerce with morality, and politics with principles and science with humanity.

The 63rd Republic Day was celebrated with great enthusiasm and patriotic fervour in the School, on 26th January 2012.The early winter morning saw the ground of the School decked with colours and high spirits. The students stood in rank order for a march past behind their House Flags with their heads held high. The Chief Guests of this auspicious occasion were the dignitaries of School administration.

The function started with a prayer and invocation of the God. Then the chief guest P.P Sarvamangal Swamiji unfurled the Tricolour flag and the entire arena resonated with the melodious tune of national anthem. After the flag hoisting ceremony, it did not take much time to get the students into patriotic mood as they enthusiastically sang the heart touching song ‘Kar chale hum fida jaan-o-tan sathiyo..’ Students of Std 1st, 2nd and 3rd were all set to perform a mass drill. Through mass drill they formed the AVM logo which was a real treat to the spectators. They practiced it in the guidance of Hemant Dubey Sir. It was followed by an amazing show of dumbbells by students of Std 6th and 7th. The students held this lightweight gymnastic apparatus and performed weight exercise showing their muscle mass, strength, endurance and athletic performance. This team was trained by Kalpesh Sir and Mehul Sir.

Students of Std 8th, 9th and 10th performed lezim, exercising with amazing coordination and synchronization accompanied by musical sound, rhythm and tune. The emitted “Rumzum” sound through this exercise was endearing to the ears and enthralled the students the most. For this show, the students were trained by Ritesh Sir and Vinod Sir. After this, Abhishek Ariwala from X A gave a stirring speech on the potential of youth.

There was a wonderful display of parade by the students of all four houses: Satyam, Shivam, Sundaram and Suhradam. This March Past seemed to be an effective way to enhance and instil qualities like obedience, discipline and attractive personality. Displaying the energy and enthusiasm, the students were following the troop leader in unison. The celebration was concluded by distribution of sweets.

Still holding fast to the high ideals of our freedom fighters and the never to be forgotten values of secularism, peace, love and tolerance, the warmth of the day was felt by every member of Atmiya Vidya Mandir present in this Republic Day function and the tricolour flag fluttered pointing to a new country in the making.
Posted by Seema Joshi at Sunday, February 12, 2012 0 comments

Outlook India : Survey of the best colleges in India

Outlook has long established itself as a respected magazine on a variety of aspects including current affairs, business, sports and even education. Over the past few years they have been conducting and publishing surveys of the best colleges of India.

College rankings, across the world, are a very subjective matter and the methodology used by Outlook has been explained on this site.

NMIMS has historically been a very good management institute (check the Outlook 2009 B-Schools Rankings here) and it seems they are following the same tradition for their engineering and technology courses as can be witnessed on this site.

Admissions to NMIMS are on the basis of their entrance exam - the NMAT 2012. The advert below gives a summary of the institute. 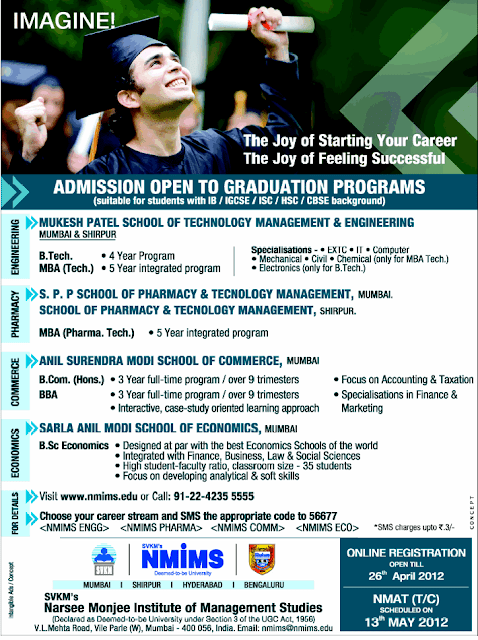 Satyam House was honoured to get an opportunity to delve into and extol the life and messages of Brahmaswaroop Param Pujya Yogiji Maharaj, a God-realised saint who inspired and transformed thousands of people, regardless of their age or background, into wiser and happier beings by His unconditional love. It has been rightly said about Him that He was “a divine soul ripened with love.”

Throughout the week (23rd Jan - 28th Jan), the prayer-hall stage adorned the divine virtues and maxims as given by this great saint and it also included some of His portraits in various postures and moods. In the morning assembly, videos of inspiring incidences, presentations and speeches about His life were shown. Under the able guidance of their teachers, the Satyam House students shared the brief life sketch of Yogiji Maharaj through thoughts, stories, speeches and role plays. In addition to that, different prayers and bhajans (devotional songs) dedicated to Him were sung by the choir group of Satyam House.

The school’s soft boards were decorated with thirty episodes from His life that depicted His righteous personality and attracted the children in masses.

To give a finishing touch to the week’s celebration, Satyam House humbly tried to present a dance-drama ‘Yogidarshan’ based on the inspiring incidents highlighting three divine virtues of Yogiji Maharaj. Such is the divine inspiration of Yogi bapa, that the students enacting His virtues, utmost obedience for his Guru, to remain positive in any situation and give selfless love, were deeply immersed in the character. The enactment was so lucid that it left the audience completely mesmerized. As the drama ended, many were in tears and resolved to be obedient. That was the real reward for Satyam House. It was only possible because of the united and unquestionable efforts of the students and the teachers.

The experience was akin to receiving an Achman - intake of holy water, for the purification of our being, from the vast multitudes of the life and blessings of this great saint, Brahmaswaroop Param Pujya Yogiji Maharaj.

It is a matter of pride for Atmiya Vidya Mandir that one of our students Sahishnu Patel has been selected as an Indian Ambassador for the upcoming 2012 World Education Games.

It is also a great pleasure for us that Krapi from Sarvanaman Vidya Mandir also got selected as another of the total three Indian Ambassadors for this event.

Congratulations to them on this achievement, at the same time, best wishes to all the participants all over the world for the competition in March 2012.

Memories of the WMD 2011 awards distribution ceremony at Atmiya Vidya Mandir have been published on the official World Education Games blog: http://blog.worldeducationgames.com/?p=4174
Posted by AVM Teachers at Thursday, February 02, 2012 1 comments